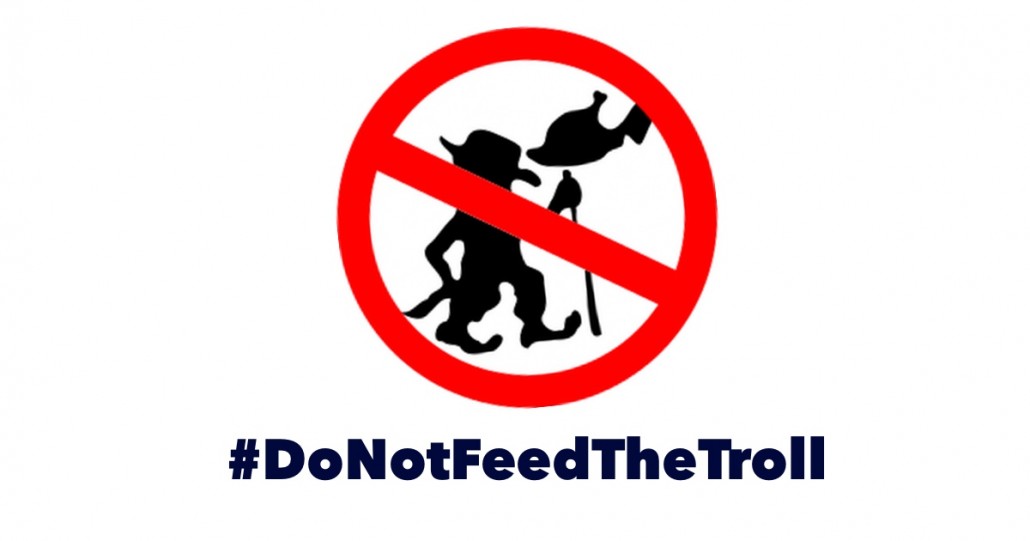 The advice to ignore rather than engage with a troll is sometimes phrased as “Please do not feed the trolls.”

How to deal with an Internet Troll.

In a world where we are more connected (yet even more disconnected) than ever,  it is important to know about the dangers of online bullies and trolls and how to deal with them.

Group admins can simply ban them can’t they? Not always that simple. The application of the term troll is subjective. Some readers may characterize a post as trolling, while others may regard the same post as a legitimate contribution to the discussion, even if controversial.

When you encounter a troll, the real solution is very simple, don’t feed them! It is their very aim to entice arguments and a heated response. Take away a response, and you take away their power.

Wikipedia describes a troll as follows: In internet slang, a troll is a person who starts quarrels or upsets people on the Internet to distract and sow discord by posting inflammatory and digressive, extraneous, or off-topic messages in an online community (such as a newsgroup, forum, chat room, or blog) with the intent of provoking readers into displaying emotional responses and normalizing tangential discussion, whether for the troll’s amusement or a specific gain.

Media attention in recent years has equated trolling with online harassment. Regardless of the circumstances, controversial posts may attract a particularly strong response from those unfamiliar with the robust dialogue found in some online, rather than physical, communities.

Experienced participants in online forums know that the most effective way to discourage a troll is usually to ignore it, because responding tends to encourage trolls to continue disruptive posts – hence the often-seen warning: “Please do not feed the trolls”.

If, however this is not enough and you would prefer to remove them from your online existence, thankfully that is easy too. Follow these steps and they won’t see your posts or comments, nor will they be able to find you on Facebook.

With over 12 years of sales & marketing experience built up working with blue chip organisations (whilst I resided in the UK), I love helping businesses & brands grow by leveraging ever-changing online marketing channels.

Everything starts with a discussion.

Whether you are just interested in having a coffee and talking about your business marketing goals, generating more business, advertising or branding, leave your details here for a FREE consultation.